It seems like not too long ago when I was in third year and was trying to decide what I wanted to do. Some of my friends wanted to continue studying in the field for an honours or masters, while some wanted to do medicine or pharmacy and some just wanted to get out there and find jobs.

I remember thinking, what do I do? Where do I fit in?
I was doing a mini neuroscience research project at the time that I had really enjoyed so I was considering honours. But at the same time, I realised I had a passion for food.

Now don’t get me wrong, I loved working in the lab and doing things I did like molecular biology, haematology, anatomical pathology, etc. But I kind of started realising my love for food and I wanted to do something that would allow me to make a difference in people’s health. That was the initial vision that drove me to explore.

Up until this point, I had never done a nutrition subject so it was rather strange. The closest thing I did to nutrition was probably metabolic biochemistry. It seemed crazy and weird but I just had this strong gut feeling that dietitian was what I wanted to be.

I did some initial reading to see if I would meet the prerequisites. I knew the course would be highly competitive, with most people having a nutrition major in their undergraduate who may be given higher priority. But of course, I wasn’t going to let this stop me. I applied anyway. I just told myself, if this doesn’t work out, it’s not meant to be.

About a month later, I was checking my email just after my final exams and I distinctly remember getting the happiest shock of my life as I saw the offer.

Soon enough, it was time to tell everyone else. It was quite funny to see everyone’s reactions because most people had never thought this was something I would study. I guess it was because I never did anything food or cooking related so they did not see my interest.

But now that I think about it, I did do a fair bit of cooking, growing up with a single parent. However, it wasn’t something that was discussed with someone else because, as a teenager, there were better things to talk about, like what happened on msn (shush, it was cool back then). I did used to take pictures of food though and I quite enjoyed this but I just didn’t realise I could make a career out of something I loved, until that ‘light bulb moment’ in third year :P

It was this time, two years ago, I took a risk and decided to pursue dietetics. I knew what I was about to do would be quite unusual from what I was doing at the time and but it’s a risk I was willing to take. To be honest, it seemed like the craziest thing I had ever done because it was a decision I made on my own.

It has been a very challenging and difficult journey but I’m so glad I took up this path because the experience I got out of it was absolutely incredible! I have learnt so much and made even more mistakes at the same time (just as you do with anything new) but it has allowed me to grow as a stronger person.

Today I had my presentation where I presented the findings of my research. That was my last assessment which
officially makes me dietitian now (yay!)

To celebrate this, we went out to get some hot chocolate afterwards as it had been raining all day but ended up eating churros (just as you would at San Churros!) 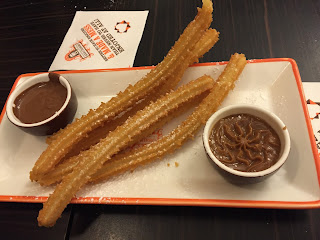 Now looking forward to doing all the thing I have been putting off, like socialising with humans ;)